Wildlife Biologist Spots Giant Jellyfish The Size Of A Human 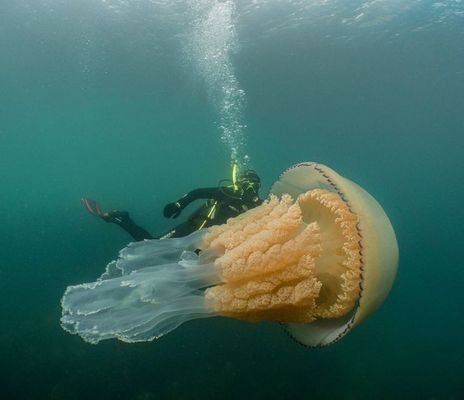 On Saturday, Lizzie Daly, a broadcaster and biologist, and Dan Abbott, an underwater cameraman, spotted something truly remarkable while scuba diving off the coast of Cornwall, England.

About a half an hour into their dive, they stumbled upon a gigantic barrel jellyfish that Daly told was as big as she is.

“Daly said seeing the jellyfish in the murky waters was “breathtaking.”

“Elated, humbled and mesmerized is the best way to describe my feelings,” Daly told HuffPost.

Barrel jellyfish like this one are frequently spotted off of England’s southern coast during the warmer months. They aren’t a threat to humans.

Daly and Abbott encountered the magnificent creature during the last leg of their Wild Ocean Week campaign, a project that involved filming their wildlife encounters for a week to raise money for the Marine Conservation Society, a nonprofit that works on cleanups, education and legislation to protect oceans.

Daly told that spotting the behemoth was “the best thing I’ve ever done. … What an unforgettable experience.”