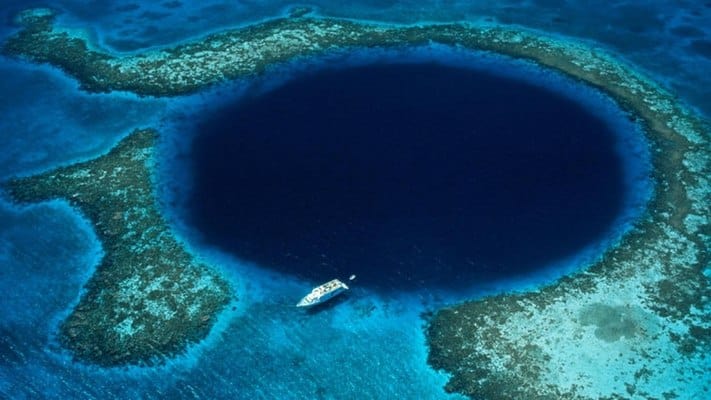 What’s Really At The Bottom Of The Mysterious Great Blue Hole In Belize?

The world is full of intriguing wonders and mysteries, and they let us guess the whole time we’ve known them. Heck, we did not even find them all.

For example, the oceans have not been well explored or understood. These vast expanses of water and the secrets they hide remain a mystery to us, especially for what lies at the bottom of these waters. But if there is something that humanity never ends, it’s curiosity.

Under the sea, there are many mysteries, environments and creatures of which we know little or nothing. There are also many human artifacts at the bottom of the ocean, in addition to other exceptional phenomena. It would be nice if we could access all parts of the sea, but we can not. At least not yet. But our technological advantage is improving and we can go further than ever.

Richard Branson decided that this was the moment when the mysteries were revealed under “The Great Blue Hole”.

This strange phenomenon is found off the coast of Belize and is about 1,000 feet wide. This makes it the second largest marine sink on the planet.

All we could do was speculate on what was at the bottom of this huge 400-foot-deep hole. Branson undertook to find the answers himself with two explorers. The group went down to the bottom of the hole. Discovery Channel was on site to film the story. As the descent continued, things began to change. About 10 minutes from their trip, they saw a stalactite that they reported was incredibly beautiful.

Apparently, the hole is formed by a complex cave system. But these caves were formed on the mainland, but the ocean levels rose and buried them under water. Unfortunately, there was no life in the ocean in this hole and the creatures they saw were dead, perhaps after falling into the hole and dying of lack of oxygen in the water. But the most surprising discovery of all was that the bottom of the hole was covered with plastic. This site has discouraged the multimillionaire explorer and discussed it in his blog.

According to Branson, the only monsters in the hole were climate change and plastic. There were plastic bottles at the bottom of the hole. Richard Branson is a very open ecologist. He is particularly in favour of disposing of disposable plastics that pollute oceans and lakes.

His feelings are shared by many, but he went further in his efforts than most. Virgin Voyages, for example, does not allow the use of single-use plastics on board.

Like many others, Branson would not like a world where marine life is destroyed by such waste. He called on the government to protect at least 30% of the ocean by 2030 and to reduce CO2 emissions and eliminate them completely by 2050.

I think we would all like that, and that’s something we can achieve if we really try. After all, our future and that of future generations depend on these conservation efforts.