6 Facts About Silfra Fissure in Iceland 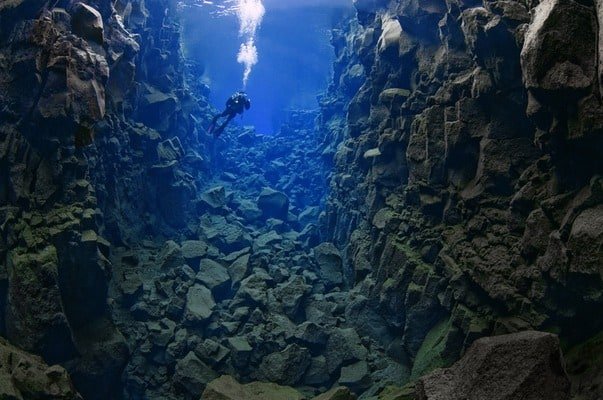 Silfra Fissure, located in Þingvellir National Park, is Iceland’s number one scuba diving and snorkelling spot. But what are some of the essential facts about Silfra Fissure that you need to know before jumping into a tour?

Silfra Fissure, located in Þingvellir National Park, is Iceland’s number one scuba diving and snorkelling spot. But what are some of the essential facts about Silfra Fissure that you need to know before jumping into a tour?

While people are right to be shocked given the frigid temperatures of this island’s waters, they would be wrong to believe that Iceland’s beauty and drama exist only at surface level. After all, this is a land defined by its water, be that in the form of mighty glaciers, sodden weather, rumbling waterfalls or peaceful lagoons.

In truth, there is no comparison to taking a snorkelling or—if certified—scuba diving tour in Silfra Fissure. Here are some of the best-known facts to get you excited for your marine adventure.

One of Silfra fissures biggest draws to scuba divers and snorkelers is the incredible, crystal clear visibility of its water, a fact due to the tiny level of dissolved elements in the water.

The reason for this harks back to around 12,000 years ago at the end of the last Ice Age. When the ice retreated to its current location at Langjokull glacier, much of the meltwater was left trapped beneath the ground.

Thankfully, lava filtration is one of the best means of keeping water clear, hence the fissure’s fantastic visual scope.

5. There Are No Fish in Silfra Fissure

Funnily enough, however, these fish rarely enter Silfra Fissure itself. More likely than not, this is both to do with Silfra’s undercurrents, and the ‘pedestrian’ traffic that swims through it each day.

With that said, baby fish are known to use the ravine as a nursery during the night, utilising the many rocks and cracks as protection from larger predators.

4. Silfra Is Split Into Four Sections

The first section of the fissure is known—somewhat off-puttingly—as ‘The Toilet’. The reason for this is that at the entrance of Silfra, marked by a short metallic staircase, exists a narrow tunnel in which water flushes from underground into the ravine itself.

Though it is rare for tours to take place in the tunnel itself given the extensive drysuit and cavern diving experience needed, the undercurrents from the tube are particularly strong, allowing snorkellers and divers to drift with ease the twenty-odd metres to the ravine’s next section; Silfra Hall.

Silfra Hall is the widest part of the fissure, often serving as that enlivening moment when the fissure’s beauty reveals its full breadth. Here, you will honestly feel like you’re flying over a tremendous blue canyon, undoubtedly one of the more unique experiences available in an Icelandic national park.

The most extensive section of the glacial ravine is known as Silfra Cathedral. This beautiful section defies the imagination with its sheer size, reminiscent of swimming through a dark blue Grand Canyon. Silfra Cathedral is also where the fissure drops to its deepest point of approximately 21 metres.

The final section of Silfra is what is colloquially termed “the real Blue Lagoon”. This spacious, yet shallow area of the ravine appears sandy, though is comprised of the dead algae so commonly found throughout the fissure. This area serves as the final section of the tour, with guides often allowing their guests the chance to explore unaided.

3. Silfra Has Been Used As A Movie Location

It should come as no surprise that Silfra Fissure’s beauty has been picked up upon by Hollywood. After all, the fissure is unlike anywhere else on earth, closer in aesthetic to Atlantis or some distant planet.

For example, the ravine was used in the religious, Russell Crowe vehicle Noah, directed by Darren Aronofsky, as well as countless documentaries, including Alien Deep with Bob Ballard and The Adventure Show with Cameron McNeish.

Naturally, the beauty of the fissure has also attracted some very famous faces, including the likes of Bill Gates and the King of Sweden, Karl XVI Gustaf. That’s not to mention the movie stars, with Ben Stiller and Tom Cruise both having discovered this underwater paradise during their own trips to Iceland.

2. You Can Visit Silfra in Summer and Winter

Visitors during the winter may be unaware that both snorkelling and scuba diving are still available as tour options. In truth, the water temperature of Silfra itself barely changes, and as in summer, you will be provided with all of the necessary gear, including mask, snorkel, fins and thermal protection.

This thermal equipment includes neoprene hoods and gloves, a cosy undersuit and, of course, a drysuit. Combined together, you will be more than protected against the cold.

Surfacing to the sight of snow laden volcanic fields and distant white mountains is something quite indescribable; the freshness of this winter landscape is only heightened by the cool tingling you’ll feel in your fingertips, by the mist of your breath.

1. It is Between The North American and Eurasian Tectonic Plates

Have you ever swam directly between two tectonic plates? This is, without doubt, the greatest novelty that comes with undertaking a tour in Silfra Fissure.

Thankfully, there is one spot within the ravine, just as you enter Silfra Cathedral, where you can touch both plates at once. Your guide will be sure to take a picture of this monumental moment.

BY Guide to Iceland NOW